DRM’d content is a big no-no. I don’t consume any kind of DRM these days. Most likely, like you — I have a ~/Music folder on my laptop. I like to keep my music collection offline - available any day I want.

I keep music cached on my disk as long as I need it. Songs get archived periodically every few months, if I have a change of taste. yt-dl is a good tool if you want to automate / batch download music for offline use, instead of live streaming from YouTube.

Currently I have these many songs, neatly tagged using ncmpcpp's powerful tag editor. If you don’t want to tag them that’s fine too, but I like having it easily indexable.

I lost track of songs that I’ve listened to - prior to 2020. Sadly I hadn’t taken a backup of my Spotify data before I quit. I was using Spotify & sometimes iTunes for offline music, because Spotify hadn’t launched in India yet and the random VPN I used had frequent connectivity issues. Some songs hadn’t released in India, so that was a bummer. You’d have to stream those from YouTube/VLC.

These days — I listen to songs to keep me distracted from my surroundings or serve as a timer when completing tasks assigned for the day. I don’t care for lossless audio quality or FLAC, although they sound nicer to hear.

PS. I wear some random cheap, wired earphones that fit well. I’m not an audiophile so don’t ask about hardware recommendations.

Spotify had a good recommendations engine. I remember every week you’d get 4 automatic playlists that suggest music based on your 4 favourite genres.

Mainstream songs would be featured in — “New Music Friday”. Initially it could not understand my taste in music, spamming random songs that don’t even remotely match my previous listening habits. Obviously, this was all based on my listening stats within the Spotify ecosystem & not other sources like YouTube / CDs, so to improve my recommendations — I completely bought into the Spotify ecosystem.

This was around the time when Spotify officially launched in India. Spotify had control over the user. I was trapped in a vendor lock-in at this point. After a couple of years, I got interested in free/libre software & realized it quite late. It was bundled with a lot of proprietary DRM so I ditched Spotify.

Now with streaming out of the way, I was organizing my old music collection, manually editing tags like a maniac. Later on I switched from Windows to GNU/Linux, and then LastFM.

After using it for a few weeks, it works like magic. I surprisingly hadn’t heard about it until late 2020 & it wasn’t until 2022 that I started using it. To use LastFm you need to setup scrobbling or in simple words — “syncing” your current music playback to their servers.

Unfortunately, I deleted my Spotify account without taking a backup, so I lost my songs that I wish’d be imported into my LastFM library today, so if you wish to port, make sure to sync before you delete your account.

The best part is unlike Spotify, YouTube Music, Amazon Prime Music or Apple Music. This isn’t a locked down ecosystem. It is supported by a lot of plugins that work with their API. Beware, LastFM is technically a non-free platform, but has a free/open API. So far, it has a good track record. It isn’t exactly a music streaming platform like Spotify, it’s one part of it. The recommendation engine based off your scrobbles.

There are alternatives like libre.fm. But nothing comes anywhere near LastFM. As long as I can scrobble freely using any libre background daemon, I don’t mind. For example: I still use YouTube - via mpv, RSS feeds & yt-dlp, Telegram, and other front ends like Nitter, even though these are made for non-free services.

I get weekly stats on what I’ve listened to the past week, fancy graphs, and recommendations on the homepage.

Neat! Pretty detailed, unlike Spotify, plastered in thicc bold typography. The best part is I can use any client to sync my playback. I don’t have to be trapped into ‘an ecosystem’ or worry about devices supporting DRM. The only downside so far, sometimes it doesn’t match the correct album art for some specific tracks, Probably something related to the tagging on my end.

I don’t really need to use LastFM Pro, they have corporate backing anyway. Their pricing seems reasonable: $2.5/month, but I’ll pass, I guess you get the point.. enough shilling now.

P.S. You can scrobble from any source, even Spotify, if you don’t care about DRM. But try looking into DRM free marketplaces like Bandcamp, SoundCloud & even to some entent YouTube Music. LastFM helped me escape a vendor-lockin.

Perhaps one day I’ll self host my own scrobbling engine - switch to libre.fm? After all it’s just stats.

Now with my library synced to LastFM, I don’t have to worry about backing up my mpd/Lollypop playlist or databases from one computer to another. Or even worry about putting all of my songs on an MicroSD card on my phone. For the forseeable future they’ll live on my disk.

I can just rely on YouTube in case I need to find that song I was listening to. LastFM fits into the UNIX philosophy ecosystem. It does one thing, and does it properly.

Consult my dotfiles repository for my exact setup. Yes, you could use more tools if you’d really need to. I was previously using Lollypop which has an inbuilt scrobbler / tag editor back when I was using a normal DE like GNOME. 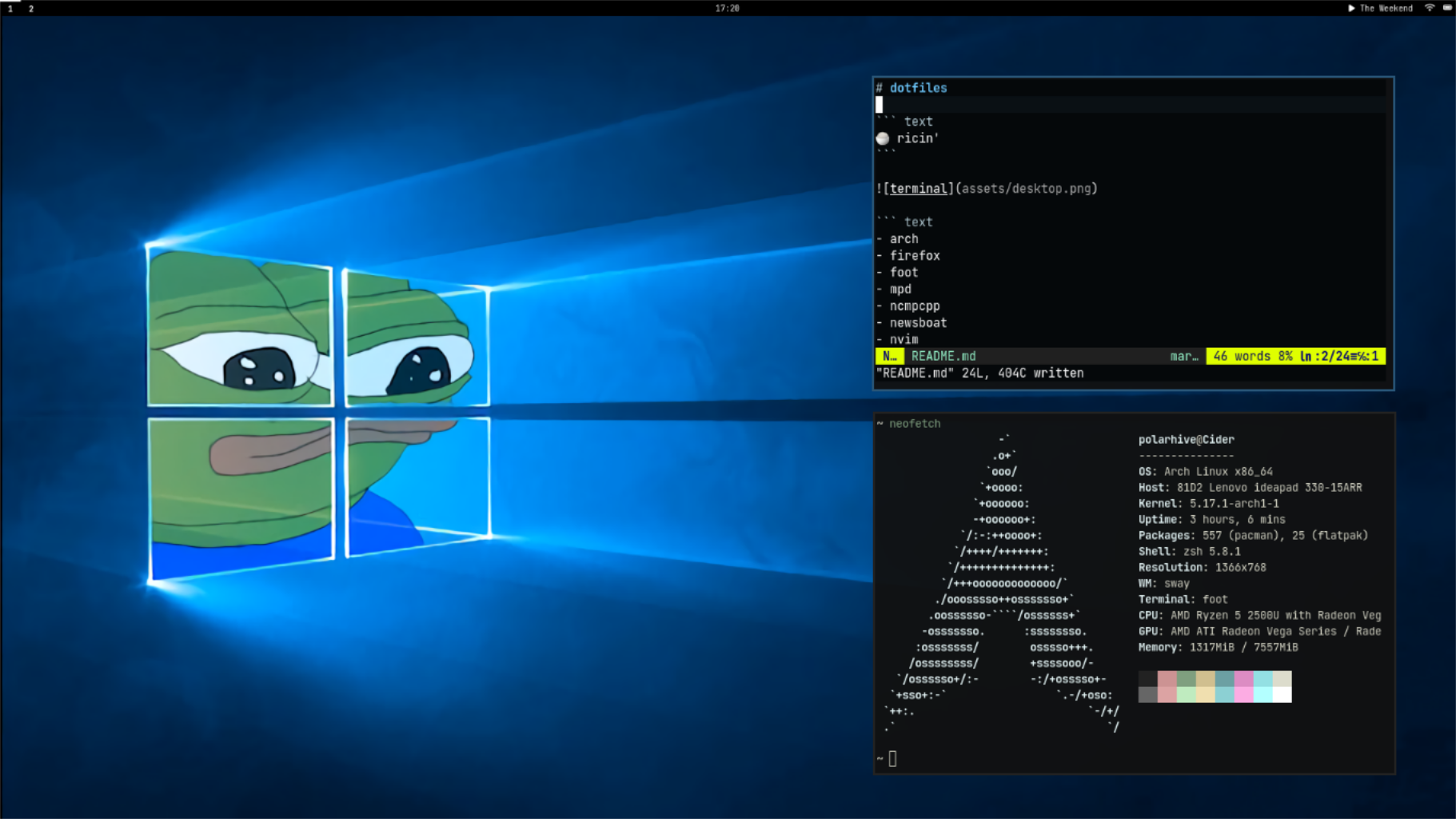 This was my music setup in a nutshell.

Checkout what I'm listening to rn!
Questions? — send an email